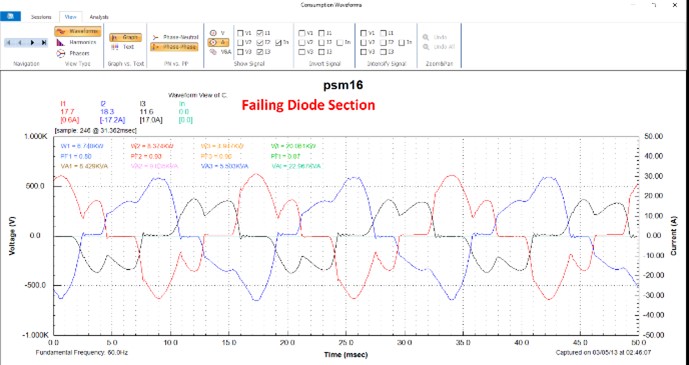 Improvements in Variable Frequency Drive (VFD) technology have resulted in lower costs, improved reliability, and more importantly increased use. Most modern VFD system have internal diagnostics that create automatic shutdown on faults. However, the cause of these faults can sometimes be elusive to locate and correct. However deenergized (MCA) and energized motor testing can provide valuable insight to help quickly and easily identify many of these problems. This brief paper highlights how to incorporate these two easy to perform motor testing techniques into VFD troubleshooting.

A VFD rectifies the incoming 3 phase AC power to create a DC bus. The DC bus uses capacitors to smooth the rectified DC as input to the invertor section. In the Invertor sector the controller uses microprocessors to control semi-conductor switches which convert the DC voltage to a variable 3 Phase AC voltage and frequency input to the motor. By controlling the amount of time, the semi-conductors (SCR’s or IGBT’S) are firing, the width of the DC pulses modulate the DC to produce a simulated three phase input voltage with variable voltage and frequency. The frequency of the input voltage determines the speed at which the magnetic field rotates around the stator. The speed at which the magnetic field is referred to as the synchronous speed (SS).

Where:  F= frequency of supply voltage

P = number of poles in the motor

Due to the switching nature from the invertor circuit VFD’s can create PQ issues by introducing harmonics into the plants electrical system. Additionally, VFD’s can also be sensitive to incoming PQ issues themselves causing the VFD’s to shut down. Many VFD’s have internal electronics that indicate the cause of the shutdown. Theses common codes assign the cause of the to overvoltage, over current, overload, voltage, or current unbalance, over temperature, or external faults. This information is important, but the real question is what caused the fault condition. Is the fault condition caused by the VFD or experienced by the VFD?

Motor Circuit Analysis™ (MCA™) is a motor testing technique that injects a series of low voltage AC & DC signals through the motor windings to thoroughly evaluate the entire motor system while the motor is deenergized. MCA motor tests can be performed directly at the motor or remotely from the output of the VFD. Unlike traditional deenergized motor tests, that fail to identify rotor problems or developing winding insulation breakdown. MCA tests provide early indication of developing faults in not only the ground wall insulation system, but in the insulation surrounding conductors used to create the coils in the stator as well as existing or developing faults in the electrical portion of the rotors. MCA can identify faults in the earliest stages but can also quickly confirm the motor “Good” which can quickly eliminate the motor as the cause of the VFD trip. By performing the 3-minute test from output of the VFD, a “good” result not only indicates the motor is good, but all the associated cabling and all electrical components in the tested circuit are in good condition as well. However, if the results indicate bad it simply requires performing an additional 3-minute test directly at the motor. If the motor tests good, then the fault is in the cabling or controller. If the motor indicates a developing fault there are optional MCA tests available to determine if the fault is in the rotor or the stator electrical circuit.

The optional dynamic test requires manual rotation of the motor shaft under test and develops a stator signature which identifies any developing faults in the insulation surrounding the conductors in the coils making up the stator winding system. The rotor signatures identify faults in the rotor electrical system such as static or dynamic eccentricity, cracks, breaks or casting voids in the rotor bars or end rings.

The input voltage to the drive provides valuable information indicting the condition of the incoming voltage supplied to the drive, calculates any voltage or current unbalance, or harmonic content in the incoming voltage or current. The input current provides indication of the diodes condition in the rectifier section of the drive. Figure 2 shows the current waveform with all diodes firing properly, in figure 3 it can be quickly determined that one or more of the diodes in the rectifier section aren’t firing properly. 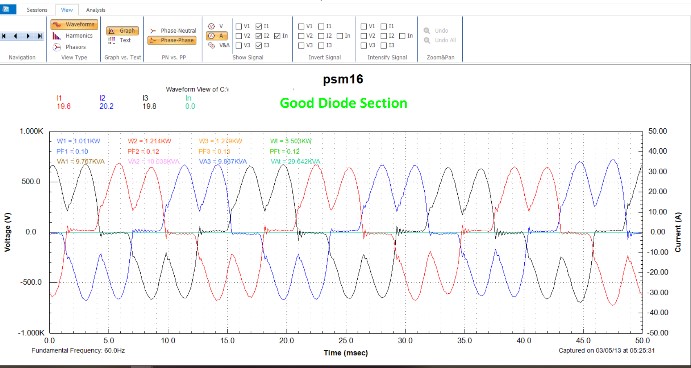 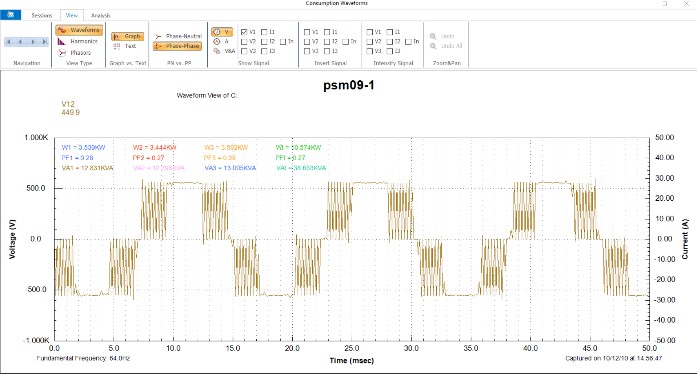 The output voltage from the drive provides information about the condition of the drive itself  as well as the quality of the power being provided to the motor, including but not limited to the proper or improper operation of the semi-conductors in the invertor circuits and developing failure of the DC bus capacitors.  Figure 4 provides a snapshot of one phase of the voltage output of the drive which is the voltage to the motor. All of the output voltage waveforms should be relatively  uniform and symmetrical. Non-symmetrical voltage waveforms indicate failing or failed  IGBT’s. Note the ripples on the flat portion of the positive and negative portions of the waveforms in figure 5. This is an indication of failing capacitors on the DC bus. A failed  $20 capacitor can  destroy an entire drive. 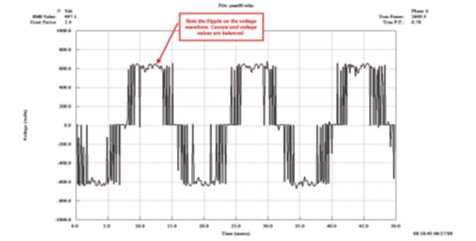 The motor’s current acts as a very sensitive transducer for the motor system. Any existing or developing faults in motor, the driven machine, or the process itself will cause the motors current to modulate. These modulations in the output current provide indication of the electrical or mechanical condition or any anomalies in the process itself. An FFT on the digitized voltage and current waveforms quickly identifies faults in the motor such as cracked or broken rotor bars, static or dynamic eccentricity. Early indication of developing rolling element bearing failures, the balance and alignment condition of the rotating components of the motor or the driven machine can also be quickly identified using the same fault frequency long recognized in vibration analysis.

The ESA software combine all the information gathered in the 50 second data acquisition process and compares them to predetermined standards, guidelines and algorithms to create the graphs, tables and displays required to quickly evaluate the condition of the entire motor system from the incoming power to the process. On completion of the evaluation ESA creates a complete detailed report that not only highlights developing problems in the electrical portion, developing faults in the driven machine or other equipment connected to the motor but anomalies in the process that could cause the VFD to trip. The 8-page report also details measurements that are within predetermined guidelines thereby eliminating most of the guess work normally associated with VFD troubleshooting. 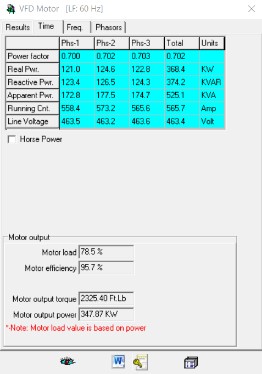 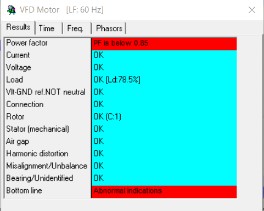 By incorporating MCA and ESA into VFD standard troubleshooting process the analyst has the most detailed information available to allow the analyst to quickly determine if the caused is caused by the VFD or experienced by the VFD. The 3-minute MCA not only identifies bad motors but can eliminate the motor as the cause of the failure and ensure that if a new motor is being installed it is fault free.  ESA confirms power into and out of the VFD are fault free in a simple test that takes less than 1 minutes.